While writing this I am on a train ride home from attending a PhD seminar in Stockholm. Exhausted both physically and mentally. The seminar has been really great, but I am not used to being around 40ish people daily, constantly, while also paying attention and trying to understand what is presented and told, as well as articulate what ever the hell it is that I am doing. But anyway, this is not what I wanted to write about. No, the reason for this post is the fact that I just got to switch my seat because of a man sitting opposite of me, drunk off his arse. So here’s to you, Mr Shitfaced Man: 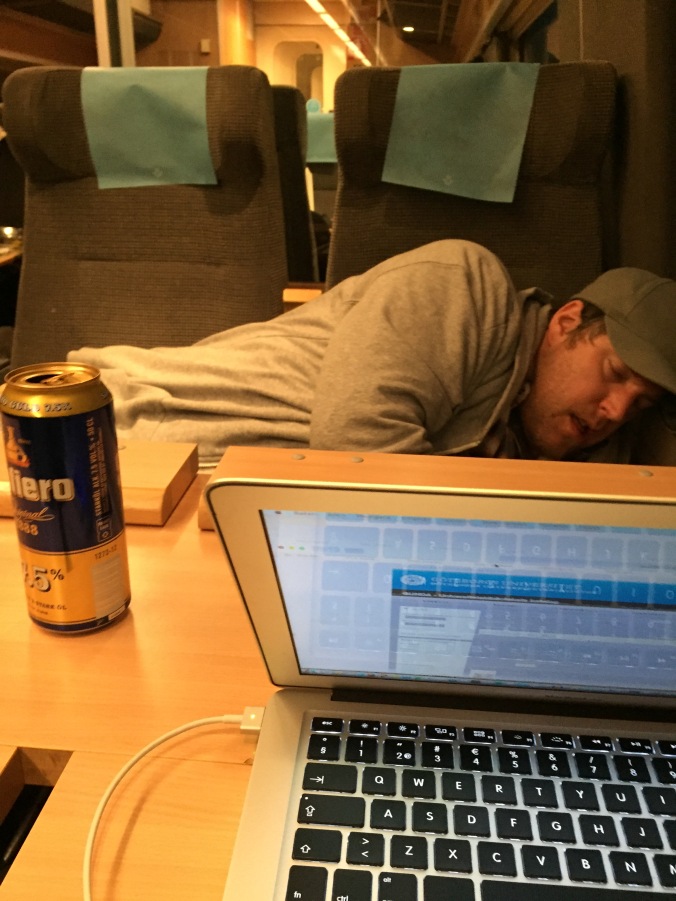 Cheers for getting on a 3+h train ride after drinking what must have been half a bar,  thus reeking of booze and polluting the air that we are supposed to share in this enclosed metal tube (space claiming: You 1 – Me 0). Cheers for cracking open yet another beer that you so cleverly brought with you on this journey where consuming alcohol is prohibited, seeing as how the 1000 you drank before getting on weren’t enough (You 2 – Me 0). Cheers for burping out loud (You 3 – Me 0). Cheers for scaring away the guy sitting next to me so that I was left alone in your unwanted company (You 4 – Me 0). Cheers for trying to make contact with me for one straight hour, when I had my headphones on, gaze on everything else but you, clearly not in the mood for any interaction (You 5 – Me 0). Cheers for being persistent! Cheers for assuming that I in any way had any desire what so freaking ever to speak to you. Cheers for imposing yourself on my personal space, and taking up more than your share of the table that we, again, are supposed to be sharing (You 6 – Me 0). Cheers for being so darn considerate. Cheers for taking up both seats on your side and falling asleep (You 7 – Me 0), finally not harassing me anymore. Cheers for falling down on the floor right when the train staff came to check tickets, so that I could tell them how uncomfortable I was in your presence and finally get to move way the hell away from you (You 8 – Me accepting defeat). I hope to never see you again, truly. Cheers.

It’s not that I am some sort of moralist who always looks down on people enjoying some alcohol, I would be a hypocrite not acknowledging my own alcohol consumption in public spaces. However, I have never in my life acted like that man was acting just now. Not even remotely close. Never. Sure, at times I have been a bit rowdy on bus or tram rides with friends while going from one bar to another, but those rides lasted around 10-20 minutes on vehicles that constantly (i.e. every 1-2 minutes) are stopping at various stations. Those were rides where the people on them are not stuck with one another for 3+ hours. Where fresh air gets in at every stop. Moreover, I (or my friends and I as a group) have never in a drunk state persistently tried to make contact with another person who ignored every one of my/our attempts. Not once. And what’s perhaps even more interesting: I have never myself experienced this type of behavior from a drunk woman (but surely, it happens too…right?). This was however, not my first encounter with a wasted man trying his darnedest to make contact with me without me wanting to or asking for that kind of harassing behavior. Of course, some might say, everything is not about gender so why even go there? Well, basically, everything is about gender. So that is why I am going there.

Now I know that there are countless studies about alcohol consumption and that men in general consume more alcohol than women (as far as I know), for various reasons. However, I do not really care about the consumption per se, but rather this ignorant, belligerent, inconsiderate, persistent, space claiming, harassing behavior that some men seem to develop as soon as they’ve reached a certain level of drunkenness. I do not want to hear any stupid excuses about alcohol making people dumb or behaving differently, cause guess what: 1. I know, 2. If you become an ass when you drink too much, what about drinking less or not at all? How is it everyone else’s fault that you cannot handle your own alcohol consumption? How about taking some responsibility over the way you act and being considerate of the people around you?

Uh geez, sorry, but this is getting ridiculous. Now another man who I saw in the train bistro drinking a beer a while ago, sitting on the other side of the aisle in the seat behind me has started talking out really crazy loud on his phone while making himself comfortable by taking off his shoes and placing his feet on the empty seat in front of him which happens to be directly to my right. I was wondering what that smell was, and now I know. Cheers for that Mr One of Way Too Many Men With The Same Pattern Of Inconsiderate Rude Space-Claiming Behavior.

I might just take off my boots that I have been wearing all damn day and stick my feet out towards him from my seat. The only problem is that there are people directly behind me who I do not wish to disturb in this inconsiderate way. Should I really have to sink to their levels in order for things to change? In order for them to understand what they are doing? I hope not.

Oh, and now he is drunkenly singing by himself and tapping on the table. How nice of him to share that with the rest of us, even though we never asked him to.